Real news from us, the dirt ball hikers, finally reached a town with internet. Alright, time to catch everyone up on all the happenings.

Last we wrote, we were packing all our things and getting ready to head into the wild. We boarded a plane in Bend/Redmond (Oregon) and it was wild to watch out the window as the miles flew by at warp speed, the ones we were about to walk back on by foot. Ville and I spent a day with our friend Anjie in San Diego getting our first stretch supply of goods, getting some biking and beach time, and got a ride from some great trail angels to the border of Mexico in a little town called Campo. We started our PCT adventure at 7 a.m. on April 29, right at the border and began walking north. There was a giant hurd of people also beginning their walk on the same day, heading for the 20 miles north, Lake Morena, where the annual Kick Off Party is held for 3 days with all the hikers, helpers, angels, alumni, and randoms all gather to send off the newbies. We met some amazing people there, all with great advice, stories, and what not to do's. (thanks Eagle Eye, Jackelope, and Bearbait for the boost in confidence, Dr. Sole for the blister control, and Catdog for shuttling all our overpacked items home to Bend after day 1)

Day one was a big push with all 7 days of gear and water to start out right (while we watched slack-packers whiz on by) made it the whole way and only Kristen managed a few fun blisters to start the trail out right. One zero day at Kick Off to relax and watch movies from past hikers was an event not to be missed. May 1st, we hit the trail later to miss the herd and managed 12 miles in and camped on a stream with a bunch more hiker trash. Here, Ville and his english, told everyone we would be camped at campsite 69 (didn't even dawn on him) and now we are fondly refered to as Campsite 69 by some. For the next few days we averaged about 18 miles a day (hit up 2 completely random and unexpected trail magic thanks to some trail crews with food and water guns and some locals who made chili dogs and breakfast bagels for thru-hikers) and made it into Warner Springs after a 10 mile day for some food, fun, food, friends, relxation, springs soaking and more food. We only stayed a night wanting to be back on the trail and hiked 10 miles out the next day.

From the border there was a wide range of scenery changes. I thought the desert was flat. Well, not quite. Who knew? And once we climbed into Mt. Laguna, it was giant pine trees and grassy meadows. Which dropped us back into cactus, flowers, lizards, some rattle snakes, and a bit of sun (like over 100 degree sun, no bueno). After crossing over Hwy 74, we came into some giant white and red sandy boulders and back into trees. And then, we climbed. And climbed. All the way up to over 8,000 feet over Apache Peak (amazing views, see pics) and dropped down into the hiker-friendly town of Idllwild. Was a great place to shower, recharge, and eat for a zero day and everything was close to walk to (this makes for very happy hikers). Realized that computers are what were were born to stay away from after downloading all our photos there and then the blog went down and lost them all. Sorry kids, we are hoping to make it up to you now.

Back up to around 9,000 feet in a day and camped just before Fuller Ridge. Hit some decent snow up Apache Peak and the backside of Fuller Ridge and before the 15 mile switchback decent, we were thinking that Fuller Ridge was all hype. Well...whoever desigened that descent, we should have a talk. :) Needless to say we were a bit spent after that down hill FOREVER and made it to camp at the base in huricane force winds. Poor Ville woke me up in the middle of the night and from dehydration, too much sun, and we think a stomache bug combo, we had to hitch a ride in the back of a cop car (was my first and will be my last time as a jailbird) to Palm Springs to rest and recoup. Any of you ever been to Palm Springs? How about after about 2 weeks out in the woods on a hiking trail? Well, let's talk coulture shock. Walked into a packed cafe for food and there was some very sweet, sensitive, caring, and well dressed men there to greet us! Like to say we saw the sights, but we layed low and watched enough trash television to beg to be back on the trail before Jersey Shore, Swamp People, or Dog the Bounty Hunter rotted our brains.

Ville, still feeling a bit rough, was dying to be out of the room and back on the trail, we crossed over Hwy 10 and began to climb back into the hills near the trillion windmills. Camped at a trout farm (tried to fight the urge to eat all the big fish we saw) and pushed 22 miles up outside Big Bear to try and get into town for our resupply. This morning we pushed 15 miles to Onyx Peak (saw a very strange scene of caged bears, lions, and dogs along the way ??? guess they are used in Hollywood films) and made it into Big Bear Lake post office before they closed for the weekend. And here we are. And what nice excentric people there are in Big Bear. Poor Ville and I were so excited about hitch hiking and both times there was a PCT hiker getting dropped off and the driver offered us a ride in. It has been great! We even got a tour of Big Bear already by Bill, a local who showed us all his knives in his truck while driving us around. Plan is to hitch back to Onyx Peak tomorrow and will update in about 5 days. Until then, check out the photos and enjoy! 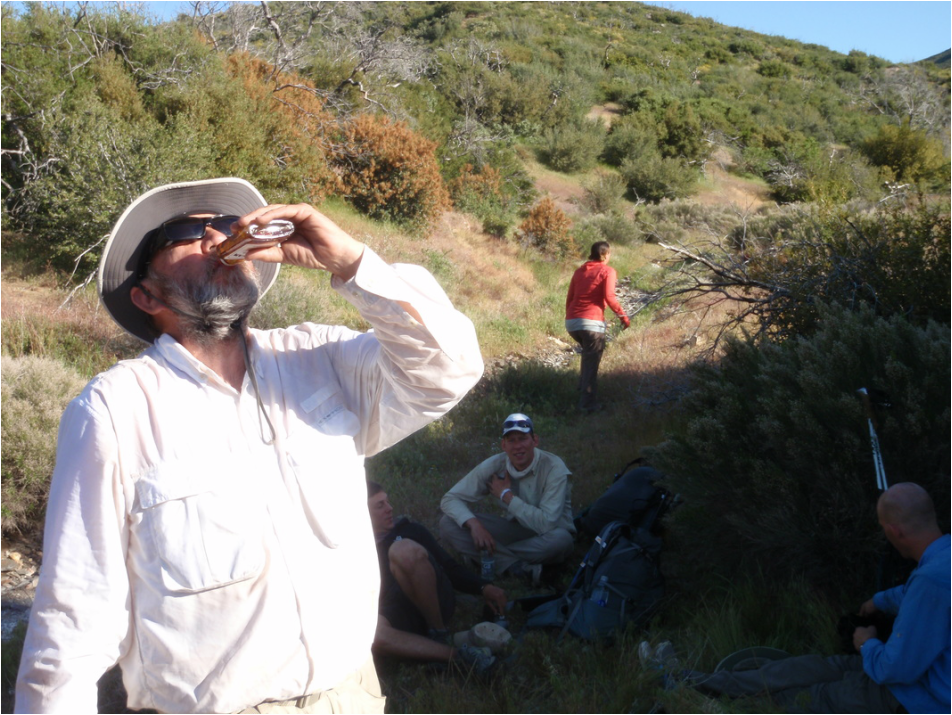