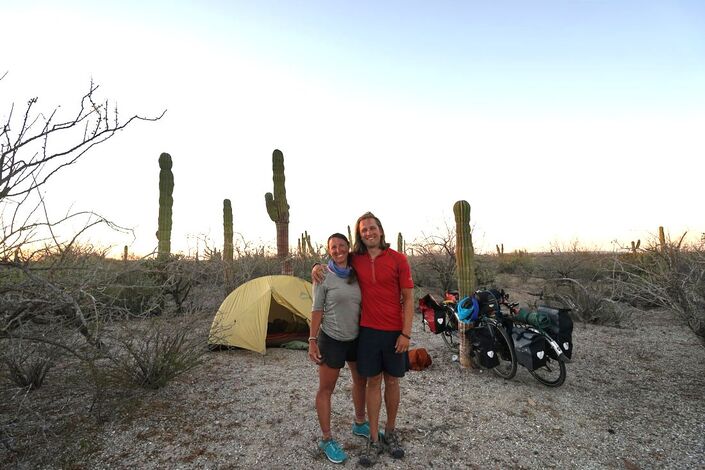 We are Ville and Kristen Jokinen, adventure travelers and international speakers from Finland and the United States. After a five-month thru-hike of the Pacific Crest Trail, we got hitched and went on to ride bicycles for nearly two years and 18,000 miles from Prudhoe Bay, Alaska to Ushuaia, Argentina.

We  were asked to speak in Bend, Oregon schools during and after the completion of The Ride of the Americas, and it has since expanded to include podcasts, magazines, news outlets, community centers and auditoriums. Our audiences are diverse; elementary students to college grads, business professionals to at-risk youth. Our mission is simple, to bring hope, laughter and inspiration to the masses.

Thanks in large part to being open, exposed and vulnerable on our adventure, we were invited to camp in yards, brought into homes and taken to quinceañera parties. The collective kindness shared with us, from strangers and friends, is what enabled us to complete our long bike journey in 2018 and a multitude of adventures since then.

Kristen is the author of a soon-to-be released book about their epic bicycle journey while Ville is a documentarist. We have been interviewed on podcasts (The Greatness Machine: The Real Darius, Conexion Abierta: Destino Turistico and Earthy4Life) and television (KGW8) and we have been featured in numerous magazines (Bend Magazine and Pique News Magazine) and newspapers (The Bend Bulletin and Etela-Suomen Sanomat). Ville's documentary shorts were in the Bend Bike Film Festival (Following My Wife and The Right Side of Normal) and his full featured documentary will be out next year.

We currently reside in Portland, Oregon, but are more often found living in a tent while traveling the world together.